Preface: As per my usual, this post is more or less a narrative, and is definitely not math-centric. But, still, nothing quite conveys the stark reality of a thing like its governing equation.  So, two of those found their way in here, but both are short and explained in English.

With that, let’s look at why energy is so good. And bad.

Any system in nature, including the human economy, is bound by a simple fact: it can only thrive and grow in proportion to the energy inputs it has access to. Energy equals growth. In economic terms the basic model is:

where Y = GDP and X is energy consumption, with both variables in per capita log form (to keep apples and oranges in their places), and f showing that Y is a function of X

Simple fact.  From a pond hosting fish, birds and frogs, to the World Wide Web, to the global economy as a whole, there’s no growth in any system without increasing energy inputs per unit of output (efficiency gains are effectively a way of getting ‘more energy’). With world energy use expected to double by 2050, keeping world economies afloat and even growing will require new energy and lots of it.  (Of course the traditional production function has many inputs besides energy, such as labor, capital and materials, but none of those can be brought to bear without energy.) The economic production function is so closely tied to energy consumption, in fact, that economists routinely use it as a proxy for economic growth.

Because constraints that define finite natural resources like fossil fuels will by definition place a serious drag on long-term growth, only the use of renewable energies will allow continued economic growth.  Recent high prices, especially in oil, are a clear manifestation of resource constraints leading to economic drag. We need energy, but conventional resources are finite. So ultimately, renewable energy will be the only way to keep our complex economy growing.

But the human economy isn’t the only system that grows and becomes more dynamic with increased energy inputs. So does the atmosphere. Greenhouse gasses in the atmosphere trap infrared heat, preventing it from escaping back in to space. The formula is clear:

Where delta-F is the change in radiative forcing, C is CO2 concentration in parts per million (ppm) and Co is CO2 in ppm before we started burning fossil fuels (reference level, 275 ppm).

What it means is that for each additional part per million of carbon in the air, the earth holds on to a bit more energy, measured in watts, for every square meter of surface area.

So far, all those additional watts per meter as we cross 400 ppm have warmed earth up a lot. They mean that, just between 1961 and 2011, we’ve trapped more than 210 sextillion additional joules of heat that would otherwise have bounced back into space. Earth’s systems can only function within society’s tolerances for so long with these joules piling up and up. 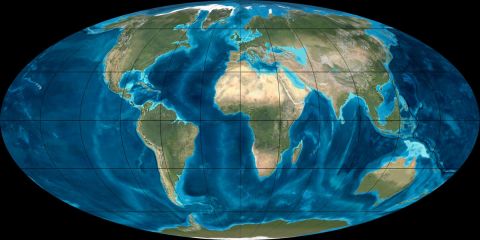 This image is a representation of Earth last time CO2 was at 400 ppm, some 15-20 million years ago. Note the greatly elevated shoreline and dearth of ice. Our map today doesn’t look like this yet because we’re still in the early days of 400 ppm this time around, and it takes a while for heat to build up under that CO2 blanket. Most of the trapped extra joules so far have gone into the ocean. If they had all gone into the air alone, we’d already be 72 degrees Fahrenheit warmer, every day, everywhere on earth, on average. An extra 210 sextillion joules (and counting) is a lot of energy.

So the earth’s natural systems grow with energy inputs too, and the resulting effects of additional energy into things like weather systems are hurricanes and tornadoes, not economic growth and money. Too many more greenhouse gasses in our air and we’ll begin to experience even more frequent extreme weather and climate events, and at some point those will begin to disrupt more than a single city or crop harvest at a time and start to threaten civilization.

Economies and weather are similar in that they both have increasing opportunities for growth and acceleration as more energy is put into them.  So if we want to keep economies growing or even simply maintain a decent standard of living for the majority of civilization, we need way more energy, but we cannot emit too much more CO2, methane or other greenhouse gasses, or we risk literally overheating the natural world.

This observation about economic and atmospheric responses to increasing energy makes the basic case for developing all present and future economies on the basis of the truly renewable, self sustaining, free sources of energy, such as wind and sunshine. We’ll never have to pay to mine either one, and neither will ever emit atmosphere-heating byproducts (or other pollutants).

Critically, this means that policies based on renewables conceivably have the power to emancipate us economically from the real-world fact of finite resources. As oil economist Gregor Macdonald recently wrote, “only a policy recommendation that foregrounded energy as the primary lever to apply to Western economies, rather than merely including it, would now have resonance. It is the energy-intensity of America in particular that must be confronted, not only in its domestic consumption but in the global energy inputs it commands through its outsourced production. Let’s remember that oil, until it is eclipsed by coal, remains the primary energy source of the world, with a 33.56% share.” As we’ve seen, this can’t continue.

Will we then wean ourselves from fossil fuels in a way that avoids a worldwide economic depression and/or dangerous climate change? Let’s check in on some interesting poll numbers. 55 percent of Americans now say they worry about global warming (a moderate improvement over a couple years back). But, and here it gets interesting, 72 percent believe that recent extreme weather such as our recent late spring heat wave may be global warming related.  Why the seeming disconnect?  To me, it suggests that deep inside most folks recognize that warming must in some way indeed be happening. But for lots of reasons, like fear that climate change itself or the process of adapting to mitigate it may change our way of life, we’re loath to admit it out loud.  And if you belong to a tribe that as a collective is uninterested in accepting science and energy economics, changing course can feel like treason.  I can understand that.

Yet for all the stated disbelief in climate science, “92 percent of Americans think that developing sources of clean energy should be a very high (31%), high (38%), or medium (23%) priority for the president and Congress,” according to a March 2012 study conducted by the Yale and George Mason University. So clearly, for some combination of reasons, there is broad underlying support for an American transition to powering economic production with renewables.

Perhaps the psychological tipping point we need to work through then is realizing that by embracing the new achievements in technical innovation that can most directly slow warming, we are actually acting to preserve rather than change our way of life, our independence, and our standard of living. Consider the excitement at FedEx about switching to electric delivery vans. Self described Republican and ex marine CEO Fred Smith says the move will allow him to operate the vans with 75% less cost. “Not 7.5%, 75%. These are big numbers.”

This is what continuing innovation has always promised: cheaper, better, more efficient economic production, all resulting in jobs and ultimately wealth. If the emerging improvement in the technologies with which we manage our economic production function help limit other dangerous threats such as warming and extreme weather, that’s fantastic, and could in some ways be seen merely as a fortunate byproduct of the new wave of technical innovation. I doubt Fred Smith cares whether you call his new efficiency innovation green or not.

Warming is real and is a threat. But let’s also realize that the technologies and approaches that help us minimize the threats associated with warming are also the next phase of mankind’s innovation. Like all great innovations of the industrial revolution, the post fossil-fuels era will continue the promise of providing more economic output from less investment (efficiency gains), and ultimately make us both wealthier and more secure.