Over the course of the past half-century, the U.S. military has proven prescient when it comes to developing and implementing new technology. From satellites to microwave technology to the internet to cellular phones, the military has taken the lead on nearly every significant technological advance that has later swept the private and consumer markets.

Now, the military is getting a leg-up on another technology that is poised to lead the next major private-sector revolution – not weapons or communications, but large-scale mobile solar-powered energy systems.

The Department of Defense and U.S. Special Operations Forces saw strong potential in SunDial’s system, and purchased the company’s first operational models. In 2010, Special Operations Forces began the Mobile Solar Power Initiative, testing the SunDial system at the Aberdeen Proving Grounds in Maryland, and later successfully testing models in the field in Afghanistan.

Testifying before the U.S. Congress about the mobile solar initiative, Admiral Eric Olson, then-Commander of Special Operations Command, said the Special Operations Forces community, “inherently joint in all it does, is in a unique position to leverage and apply Service and Department Science and Technology efforts to rapidly field new technologies on the battlefield.” Often located in the most remote areas where fuel must be airlifted to the point of consumption, Special Operations Forces had the greatest need for renewable energy solutions.

SunDial’s unique system has a clear attraction for military operations. Packed into a single 20-foot shipping container for easy transport, the unit consists of 120 installation-ready solar photovoltaic panels combined with a convenient communications center. A team of one trained expert and five or six local laborers can unpack the container and set up a functioning solar field within two hours.
Once emptied, the trailer is equipped to double as a self-sufficient field operations facility. The whole unit can be packed up again on a moment’s notice, and transported to the next location, or can be transferred to the local population as part of the exit strategy to power the village long term with sustainable energy – an innovative application in “nation building” at the village level that is very attractive to special forces.When fully set-up and functioning, a single unit can produce 28.8 kilowatts (kW) of power at peak daylight hours (which will increase to 34.2 kW with capacity and design improvements already in development) – significantly more than other comparable mobile solar energy systems. While the sun is shining, the panels produce “load” power and also charge a system of 64 storage batteries housed within the floor of the trailer unit. After dark, the batteries provide power well into the night, with an optional back-up diesel generator that kicks in automatically when the batteries become depleted to provide seamless power. At sun-up, the diesel generator turns off and the solar panels take over again, producing power and recharging the batteries.“We see mobile solar/battery/diesel hybrid systems as a game-changer globally,” said Dan Rice, President of SunDial. “Oil companies, mining companies, non-profits, disaster-relief agencies, foreign militaries, and anyone operating off-grid can see cost savings and value in converting from diesel only. This is where renewable energy makes the most sense – in remote areas where the current cost of energy is the highest because fuel to remote areas is expensive and logistically challenging.” 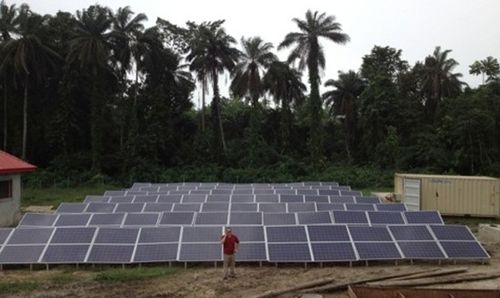 Though the military has been at the forefront of recognizing global climate change as a significantnationalsecurityrisk and taking steps to reduce its carbon footprint, that is not the driving motivation behind these clean-energy innovations. From the military’s standpoint, the main advantage of mobile renewable-energy systems is tactical – energy self-sufficiency improves the effectiveness and mission-readiness of our troops, and makes them safer. For one thing, it reduces dependency on foreign oil which is made into JP-8 (military fuel) and transported across the globe.

Second, it cuts down on the need for costly and dangerous fuel-resupply convoys, allowing operations to reach remote areas previously unsuitable for advanced equipment due to the difficulty of resupplying diesel fuel. This also acts as a ‘force-multiplier,’ freeing up personnel for other tasks and increasing the effectiveness of a set number of troops. SunDial’s Maryland-built systems therefore reduce convoys, save lives and taxpayer dollars, and create jobs in the United States.  “It’s a win, win, win, win,” says Rice, who speaks from experience: he was awarded the Purple Heart after being hit by an Improvised Explosive Device in Iraq in 2005.

While the international community, national governments, and the private sector have largely lagged behind in recognizing the benefits of and mobilizing funding for clean energy technology, the military is establishing a strong track record for funding and developing such systems. In addition to SunDial’s mobile-solar units for operations overseas, the DoD is investing in major clean–energyinstallations on domestic bases.  A Navy SEAL program is testing individualizedsolar–poweredgear for troops on the move in an effort to make soldiers net-zero energy and net-zero water use.

If recent history serves as an example, now that the military has invested the up-front R&D funding to carry these nascent technologies through the testing phase and proven their viability, the previously-skeptical private sector will jump on board, finding new civilian applications and making them widely available to a broader market. Once the private sector recognizes that there are similar efficiency and sustainability gains to be made in the civilian arena, SunDial and other solar-energy innovators will be well-positioned to cash in.

In fact, SunDial is already expanding its scope beyond purely military applications. Through contracts with foreign governments and private energy companies, SunDial now has mobile solar units operating in multiple countries on three continents (North America, Asia, and Africa). These units are bringing power to remote locations which have never before been electrified – such as one unit funded by a Chevron project that is powering a new water purification facility in rural Nigeria – replacing extremely dirty diesel generators and providing energy at a fraction of the cost. The emptied containers then become fully-powered, usable space that can serve as telemedicine clinics, internet cafes, corporate headquarters, or even living quarters to house personnel.

Looking ahead, SunDial sees a strong market for its mobile solar units in the contexts of disaster relief, rural electrification, and humanitarian assistance.