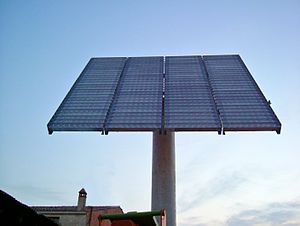 Solar energy is still a great option, especially as solar power advances and becomes much more efficient. Right now, solar power isn’t efficient or strong enough to turn the lights on for an entire city, but alternative energy manufacturers need to make people aware that it is a great supplement to more traditional fuel sources. On an individual level, solar energy is still a great boost to help take homes “off the grid” on some level, saving homeowners in energy costs over time and reducing the amount of fossil fuels used in the home.

According to the US Department of Energy, solar energy could eventually be as affordable as traditional energy sources, and potentially even cheaper than coal. Advances in this field include flexible thin-film Copper Indium Gallium (di)Selenide (CIGS) photovoltaic modules that are lighter weight and easier to install than traditional boxy solar panels. Right now, these modules get about a 12.1% peak conversion efficiency, but the company is hoping to raise this efficiency dramatically in the next few years. Clearly, solar power is advancing rapidly, and as more companies focus on research and development in the area of solar energy, it will become a more and more viable alternative energy option.

Wind energy is not a great option

Wind turbines have gotten a bad reputation recently for ruining the landscape, killing birds, and generally being a nuisance. One thing that can be said about this myth, though, is that continuing to use coal energy regularly will blow up mountaintops and ruin entire ecosystems in our lifetimes and the lifetimes of our children!  While wind energy, like solar energy, is somewhat dependent on the vagaries of nature, it’s estimated that most wind farms pay back their original manufacturing costs within three to five months of operation!

Wind power can definitely be a great source of renewable energy into the future, especially as it, like solar energy, becomes more and more efficient. Like other forms of alternative energy, wind power requires a backup source of energy for the times when nature isn’t cooperating. However, this problem will become less and less of an issue as wind farms find better ways to store the energy created by wind turbines so that it can be released at a later time.

Renewable energy will never be able to replace fossil fuels

Daniela Baker is with the credit comparison website, CreditDonkey.   Are you having trouble finding funding for your small business? One option for short-term funding for projects are  business credit cards, which can give you rewards as well as a viable source of funding to keep your business running into the future.