Yesterday (August 1st2012), in separate but strikingly similar events, those who deny that climate change is real and say climate science is a conspiracy were told that they could declare victory.

First, the U.S. Senate, during its first hearing on global warming in almost three years, was informed by Senator James Inhofe (R-OK) that global warming is the “worst scientific scandal of our generation,” and that “the global warming movement has completely collapsed.” (You can watch a replay of the entire hearinghere.) To help cement his points, Inhofe twisted and misrepresented the words of climate hawks David Roberts of Grist and Bill McKibben, founder of 350.org.

Simultaneously, halfway around the world, Australian magazineThe Monthlywas printing a coverstorytitled “Victory of the Denialists: How Climate Science Was Vanquished.” The article, by Robert Manne, a professor Australia’s at La Trobe University, is atour de forcereview of organized efforts to deny warming science and to misinform Americans about the dangers of climate change and therefore the need to take remedial actions, such as transitioning away from fossil fuels. 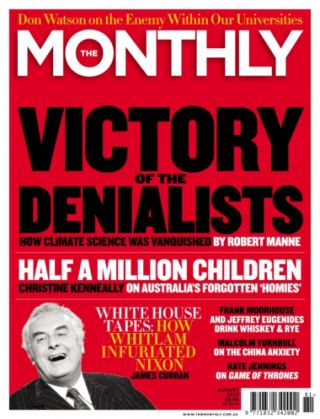 August 2012 cover of The Monthly

Manne’s case for denalist victory, based as it is on facts, is far more persuasive than Inhofe’s. And indeed the dearth of major policy efforts to change national and global economies such that they may keep functioning (by limiting warming as much as we can and adapting to what warming we’re already committed to) in a way we would recognize does indicate that denialists have been winning overall thus far. And, I won’t deny it, they’ve been winning big time. Even the candidates for chief executive of the United States won’t discuss our primary existential threat. As Elizabeth Kolbertobservedrecently:

“Along with the heat and the drought and the super derecho, the country this summer is also enduring a Presidential campaign. So far, the words “climate change” have barely been uttered. This is not an oversight. Both President Obama and Mitt Romney have chosen to remain silent on the issue, presumably because they see it as just too big a bummer.

And so, while farmers wait for rain and this season’s corn crop withers on the stalk, the familiar disconnect continues. There’s no discussion of what could be done to avert the worst effects of climate change, even as the insanity of doing nothing becomes increasingly obvious.”

And yet, even as the fossil fuel interests and their allies take yesterday’s two pronouncements as fuel for a victory lap, they should be careful to observe what else came out in both hearing and article.

Inhofe wasn’t the only one to testify before the Senate. Slate.com has arecapof testimony from invited climate scientists, including this unambiguous nugget: “‘It is critical to understand that the link between climate change and the kinds of extremes that lead to disaster is clear,’ Christopher Field, a leading ICPP scientist, told lawmakers.”

For his part, Professor Manne, in discussing his paper with Australian journalistGraham Readfearn,had this to say about his considered conclusion that warming deniers are winning: “If climate change denialists are pleased [by the conclusion], then they have chosen to ignore the explicit claim of the article that they are part of an irrationalist movement that is placing the future of the Earth at risk. The role of analysis is to be as faithful to the truth as one can be, not to boost morale or to support delusion.”(Readfearn’s articlehere.) That is to say that convincing folks that climate science is still debatable is to persuade them to share in a dangerous delusion.

The funny thing about delusions is they have a way of crumbling in the face of reality. Even as Senator Inhofe was pronouncing anti-warming victory, his state of Oklahoma was sweltering underall-time recordheat. The lesson may be lost on him, but for the rest of us, to take yesterday’s pronouncements as “mission accomplished” or final victory for warming denialism is both premature and foolish. Because warming is real, science has proven it, and anyone capable of rational evaluation of facts knows it. Facts matter, and, ultimately, they can’t be denied.